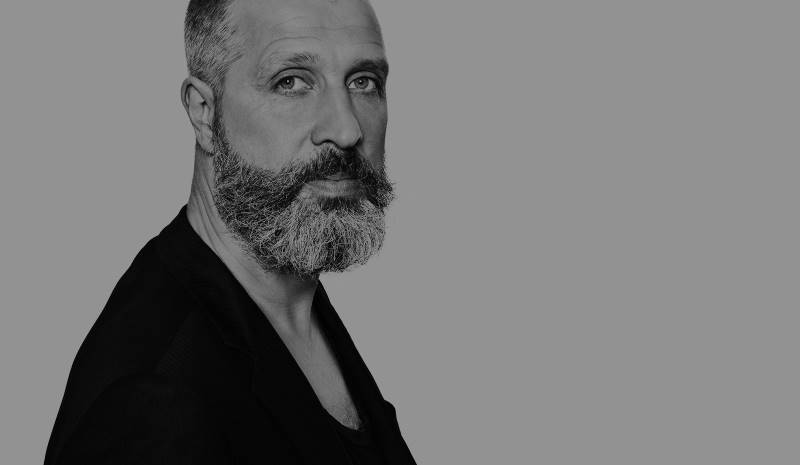 Barcelona
Known for projecting mysterious objects, exemplars of vibrant design of the 21st century, his resulting design approach concentrates on experimentation with materials, technologies and lines.
Harry Paul works across a wide range of disciplines, from furniture (in- and outdoor), lightning and table top, to textiles, watches and golf shoes, to architectural & interior/stand commissions and unique sculpture pieces for clients world wide.
Born in Breda, the Netherlands, class 1966, industrial designer with a degree from the Design Academy Eindhoven (former AIVE), where he, before graduating, 1992, under Lidewij Edelkoort and Axel Enthoven, won the 1st price in the European design competition for leisure of GE Plastics with a proposal for a custom made protective sports equipment.
Coming from a creative family background, fashion and jewellery from his mothers side and construction from his father, which was handover from his father, harry’s grandfather, who built in his spare time, his own speedboat and mobile home, out of wood, in his own garage. Harry spent his full childhood in the Netherlands, occasionally travelling around in Europe, Africa and to the US, dedicating himself and most of his time to his number one passion sport: football, playing for professional (and none-) football teams like NAC Breda and Willem II Tilburg, Baronie and Jeka.
In 1994 with a scholarship he enrolled in the advanced Master course at the Domus Academy in Milan. Graduating that same year under Stefano Giovannoni with a number of proposal solutions for street prostitutes, being confronted with and sensible to the circumstances under which those prostitutes had to practice their profession in that city. The most practical and ingenious solution was the silicone carpet Aladino, a portable silicon display with accessories like lightning, alarm, heating, fan, communication, space for sex toys, etc.
After freelancing for and signing with Giudo Venturini, Stefano Giovannoni and Mateo Thun, creating modern design icons like, Antonio (Alessi), Nonno di Antonio (Alessi), Fred the worm (Alessi), Ship Shape (Alessi), Bruce (Alessi), Can Can (Alessi), Bomba table (Magis), Mago Broom (Magis), Alessi Floss Torch, Aroma coffee cups (Koziol) and Vimar spa, Supernova line of adaptors, plugs and sockets for the European market (-still sold till date), in 1998, he established the studio Harry&Camila in Milan, taking on the art directions for TVS spa and theMICAM.
In 2002 he moved to Barcelona but continued to spend time in his adopted home, Italy, signing for a number of design manufactures there.
Harry Paul has exhibited extensively around the world and won several awards including in 2007, 2008, 2009, 2011 and 2014 the Good Design Award of the Chicago Athenaeum, world’s oldest and most prestigious award of its kind. Harry Paul has been a visiting professor at DA, Milan and IED, Barcelona.
He is the proud father of Indianapolis, Blu Canela and Moon.